This minor update contains a few new features and improvements, and will be the last major update before the new year. As we did last year, there will be a pause in development to ensure things are stable for the busy holiday giving season.

After a break in new features and changes, we're back with a small update that is almost entirely behind the scenes.

Donor Relationships - This new feature allows you to track your donor's relationships with each other. It's designed to be very simple, flexible, and easy to use. It can be found on the Donor Info tab, which has also been divided up to keep things more organized:

Once on this screen, simply click the Add Relationship button to define a new connection. This will slide down a form where you can select the donor and set the relationship text:

Hopefully this proves to be a useful tool to quickly see how your donors are connected to each other!

Receipted Amount for Payments - After discussions with a few customers on this issue, we've added a new optional field called Receipted Amount that can be tracked on payments. This new field is turned off by default. To enable it, when adding a Donation, click the gear icon in the upper left and enable it from the choices shown: 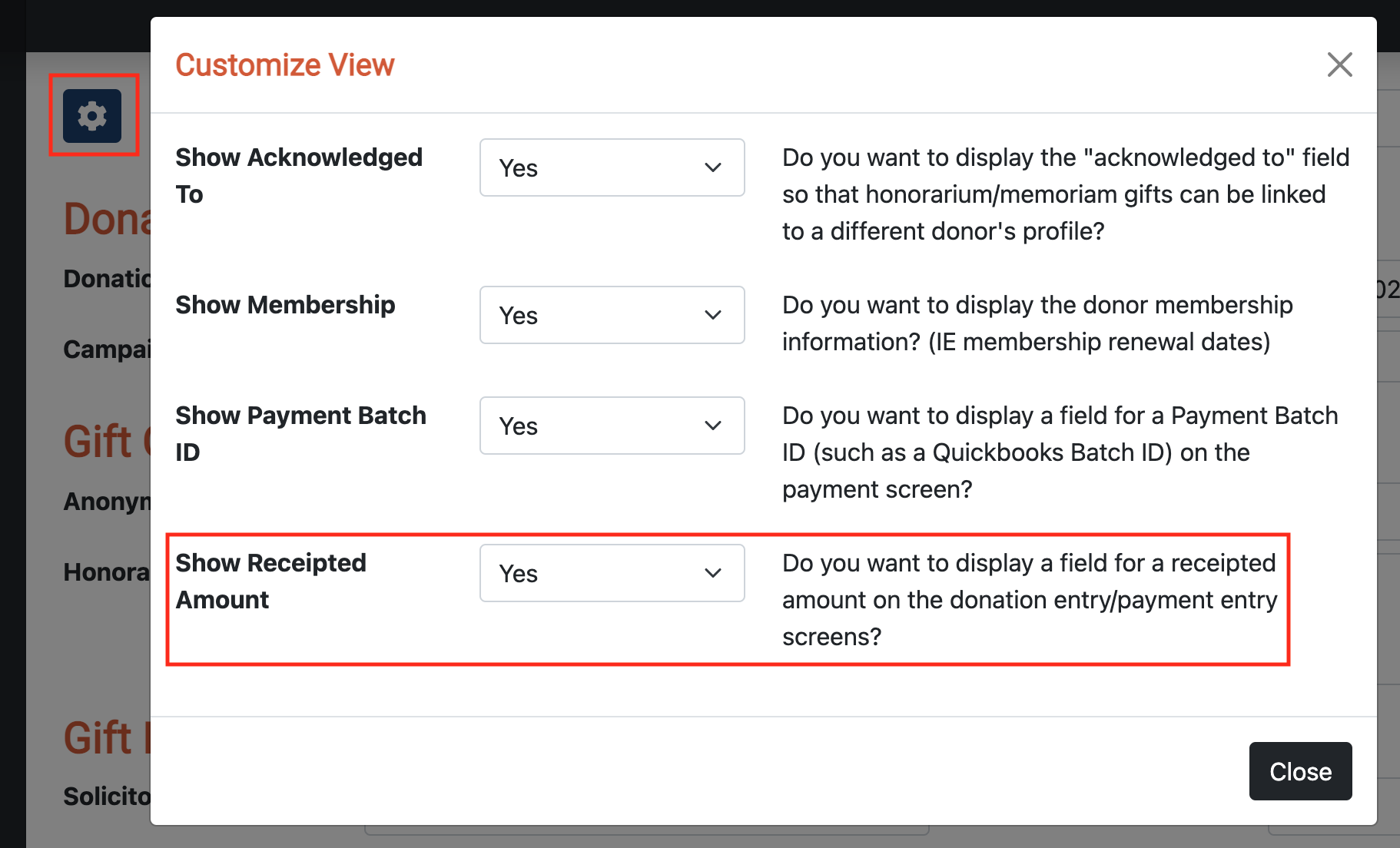 It will then appear when entering new donations or editing old payments:

Why this is sometimes needed: There are several different possibilities for why this is useful and needed. Two examples are:

In both of the above scenarios, if you are generating a year-end receipt and use the calculated fields of YTD Payments Received or Previous Year Payments Received to present the donor with the total amount they've donated for tax purposes, the total will be inaccurate. Thus, if this is a problem your organization faces, you can enable the Receipted Amount field to produce more accurate calculations.

NOTE: As part of the update, the receipted amount will automatically be made equal to the payment received amount for all payment entries in the system. If you do not enable the feature, behind the scenes, it will continue to make them equal. Once enabled, however, you can make the field have whatever value is desired by editing previous entries or when adding new entries.

We're very happy to share with you an exciting new tool that will allow you to make your appeals and thank you messages even more exciting: A video making tool! This tool allows you to upload a video or record yourself with your webcam. You can then add your logo and custom text using a variety of font and overlay choices. How does it work? Well, watch the video below which was created using the Video Maker:

This tool will, we are certain, be very valuable to you as you continue to work to make your communications ever more personal. We are excited to hear your thoughts as you make use of this new tool. Hat tip to Borders Web Development for their assistance in this project.

The video maker was our primary focus for this update, but a number of small bug fixes related to the new look and feel were pushed through the last two weeks. We won't enumerate them all here, but wanted to share our thanks to those users who reported the issues.

As always, please get in touch with your suggestions and feedback!

With this update of Donor Wrangler, we've upgraded our look and feel, making use of the latest version of Bootstrap to make the site even more mobile friendly and up to current standards. While things do look a bit different, you should continue to enjoy the same user-friendly experience that you've always had. Likely, the biggest change you will notice is that the menu has been completely reorganized. Certain items, such as Letters, Emails, the Image Library, and Marketing Emails have now been grouped together into one main menu item called "Correspondence". Clicking this top level item will reveal these choices. By reorganizing and grouping the menu in such a way, it will hopefully make some things easier to find, and will allow for the menu to continue to grow as new features are added.

In order to make calculating the number of payments received over a given time period, this update includes a variation on the Timeframe Donation Totals report and column, namely one that centers around payment totals over a given timeframe. This new column, like the timeframe donation totals, is available on any Donor report. In addition, a new dedicated report has been added.

This variant is important largely due to recurring gifts and pledges. If a donor signs up as a recurring giver in 2020, the will not show up in a Timeframe Donation Totals report because their original donation was logged in 2020. (Pledges function the same way.) Thus, if you wish to generate a list of all donors who have paid at least $300 over the last 18 months, such a donor could be missed. With the new column and report, this will allow you to ensure they are included.

Now that this necessary update to the look and feel is complete, stay tuned for our next updates, which will include some exciting new features!

Version 53 brings several new improvements in the run up to a revamp of our design coming in the next update.

After a number of incremental updates, the Grant management module is now available! 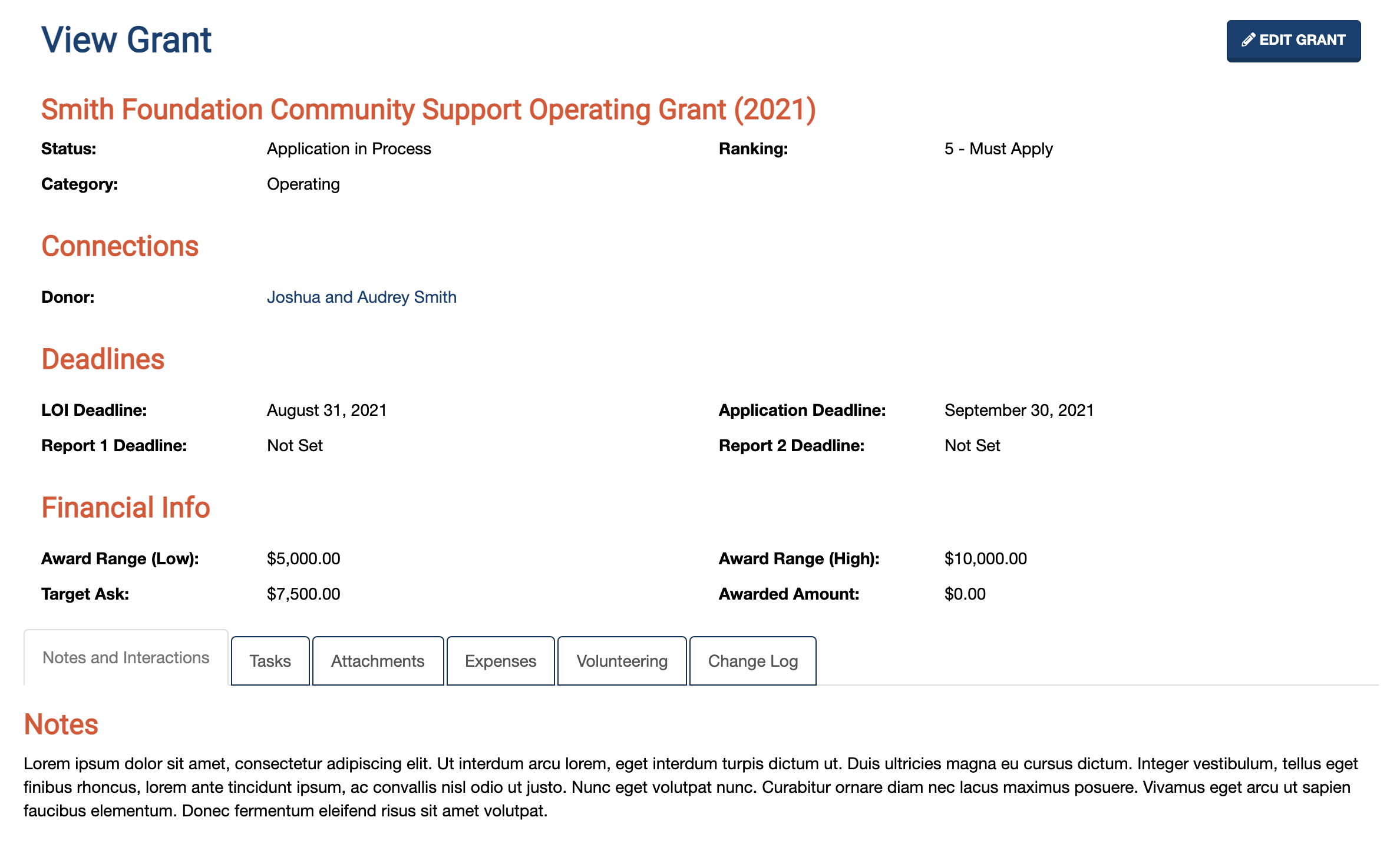 The Grants module can be found in the menu underneath Donations. For an overview of how the system works, please check out this help article: Overview of the Grants Module.

If your organization will not make use of this feature, you can turn it off on the Options page, under the System Settings tab.

A crucial component of the Grants module, the Task Templates feature can also be quite useful for general donor management. You'll find it under the Tasks menu:

Requested by one of our customers, we've added a Campaign Thermometer option for Donation Forms. When setting up your form, at the bottom of the Form Labels and Fields tab, you will find this new option:

This will allow you to specify a campaign, target fundraising amount, and optional start and end dates. The system will calculate all gifts received for that campaign (whether through a donation form or offline) during the provided date range. (If no date range is set, it'll total gifts received for the given campaign for all time.) Next, to add the thermometer to your form, modify the Donation Page Landing text and use the Merge Fields button to add in the thermometer. You can also display the amount raised so far, and the target amount:

Finally, after you save your form messages, this is what you'll see on your donation form page:

We hope this will help you create more attractive and engaging donation forms!

Donor Profile Pictures: You can now upload profile pictures of your donors. The option appears on the edit screen right beneath the Display Name on the edit screen. Images will automatically be resized to 800 pixels wide to save storage space and load faster.

Image Cropping: Images that are uploaded can now be cropped from the Image Manager. 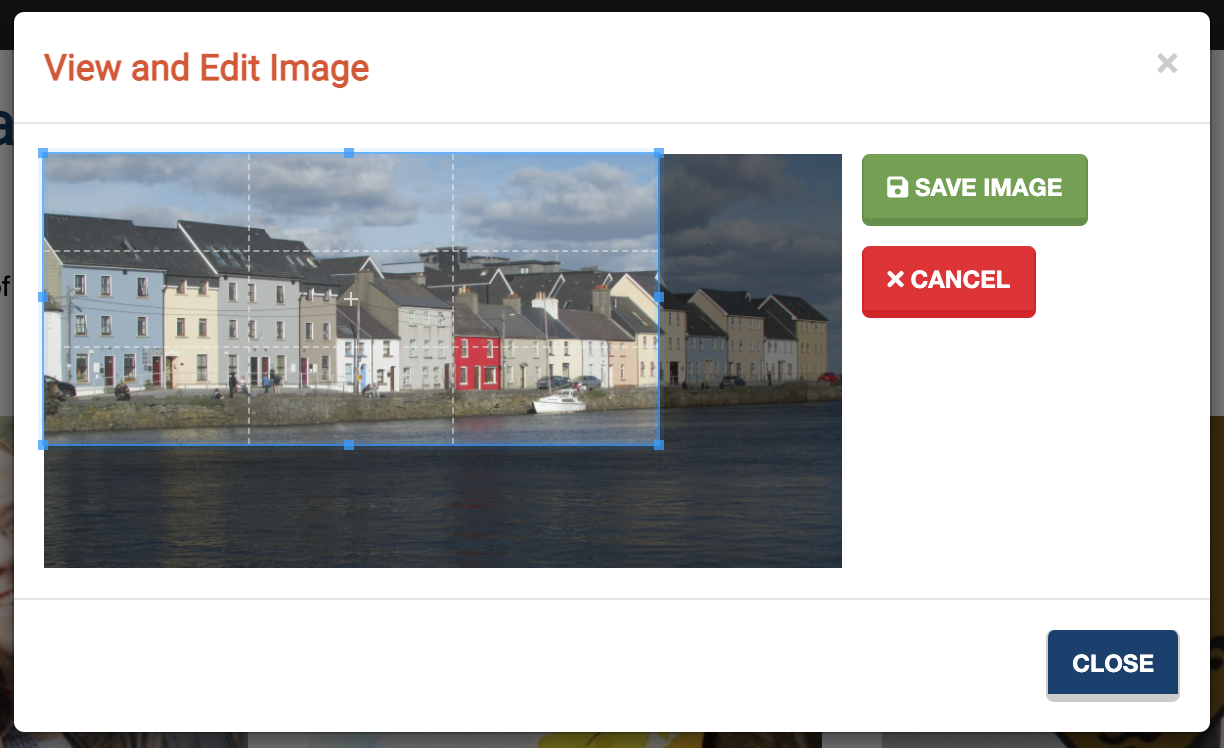 Subtasks: Sometimes tasks have multiple steps and may require input from multiple people. This is especially useful for writing grants, when multiple people are likely involved in the process. Thus, we've created the ability to have Subtasks. On each task, a new tab for Subtasks appears.

When viewing the parent task, then, the number of subtasks and how many of them are complete are shown:

Subtasks have all the same features as tasks, meaning they can have different due dates, different reminder dates, different assignees, their own attachments, and so on. We hope this feature will prove useful in keeping you organized!

By default, all users have been opted into these reminders. However, you can change your preference on the User Edit page as shown:

For information about updates prior to Version 50, please visit this article.